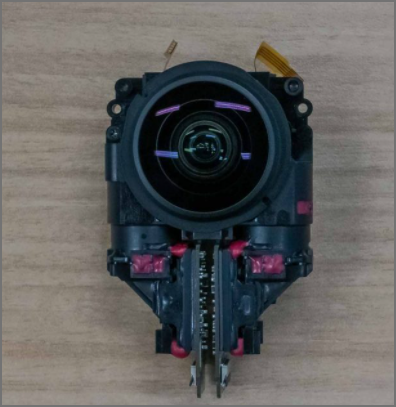 RICOH THETA lens repair can be a sad discussion. Officially, you need to replace the entire assembly, which can be expensive. If you scratch or damage the lens, you will need to send the camera into a service center and replace the entire lens unit. A community member reported that the cost in the UK was 380 pounds.

As this may be too expensive for some people, some replacing the lenses themselves. The process involves finding a broken camera on eBay to use as a donor parts camera. You then need to take apart the THETA and combine the working parts of two broken cameras into a single working camera.

Video from 360 Big Sky Media on replacing the lens of a THETA V with the lens of a THETA SC. I personally would be extra cautious with this approach as I imagine that there may be small manufacturing differences between the lenses that are calibrated as a module to compensate for lens distortion. However, even if I would be cautious, it worked for the guy in the video.

See this picture he took with the THETA V with one of the lenses from the SC.

Even with the lack of lens calibration, the stitch error appears to be minimal. The picture looks completely usable for streetview. This is a good fix in my opinion.

This bold guy actually took off the lens.

The amazing thing is that the guy appears to have used a lens from a THETA SC to replace the lens of the THETA V. The video indicates that he bought the SC for 29.99 (I think in pounds).

Took out the entire module.

I did a search on RICOH THETA on eBay with a max price of USD $74. The two results below look promising.

The cracked lenses look like a good possibility. It looks like one of the units has both lenses intact.

If one of the SC2B models has an intact lens assembly, it might be possible to swap out the entire assembly into another unit.

The only way to officially repair the lenses of a RICOH THETA camera is to send it into a service center and replace the entire lens module. Posts in the community indicate that this may cost more than the value of a used camera. As people are throwing away the damaged cameras and have nothing to lose, some people are disassembling the cameras on their own and replacing the entire lens assembly or even replacing a single lens.

I have not tried this myself. However, my guess is that it is better to first replace the entire lens assembly if you can. There may be slight manufacturing differences in the lens that could affect the image stitching if the lenses are not calibrated as a unit.

If you have any successes with lens replacement, please post your experiences below to help out the community.

Link to image on Google Streetview.