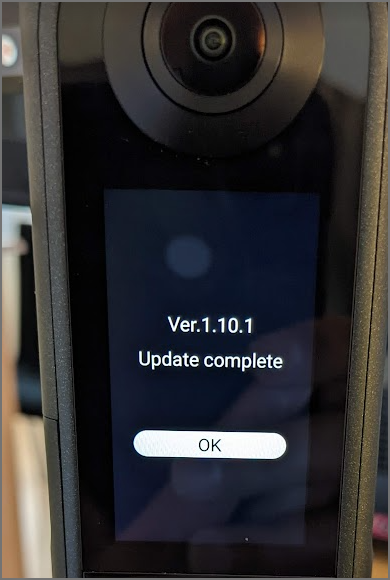 The official release notes from RICOH indicate these changes.

The “improved shutter time lag” refers to the time between the shutter button press and the camera taking a picture. The lag can cause problems when a person is taking a virtual tours and moves the monopod to the next position soon after pressing the shutter button. This can result in blurry images.

The AI Auto setting refers to the feature shown in this video.

From my independent tests, one of the improvements is in how the 8K video API works. Previously, there were some limitations starting and stopping the 8K video with the API. Now, it appears to be working smoothly.

Confirm that you want to upgrade the firmware then, click OK

Application will let you know that the firmware update is done.

In my upgrade, the camera took several minutes to complete the upgrade after the application displayed the window above.

Eventually, the camera indicated that the update to version 1.10.1 completed.